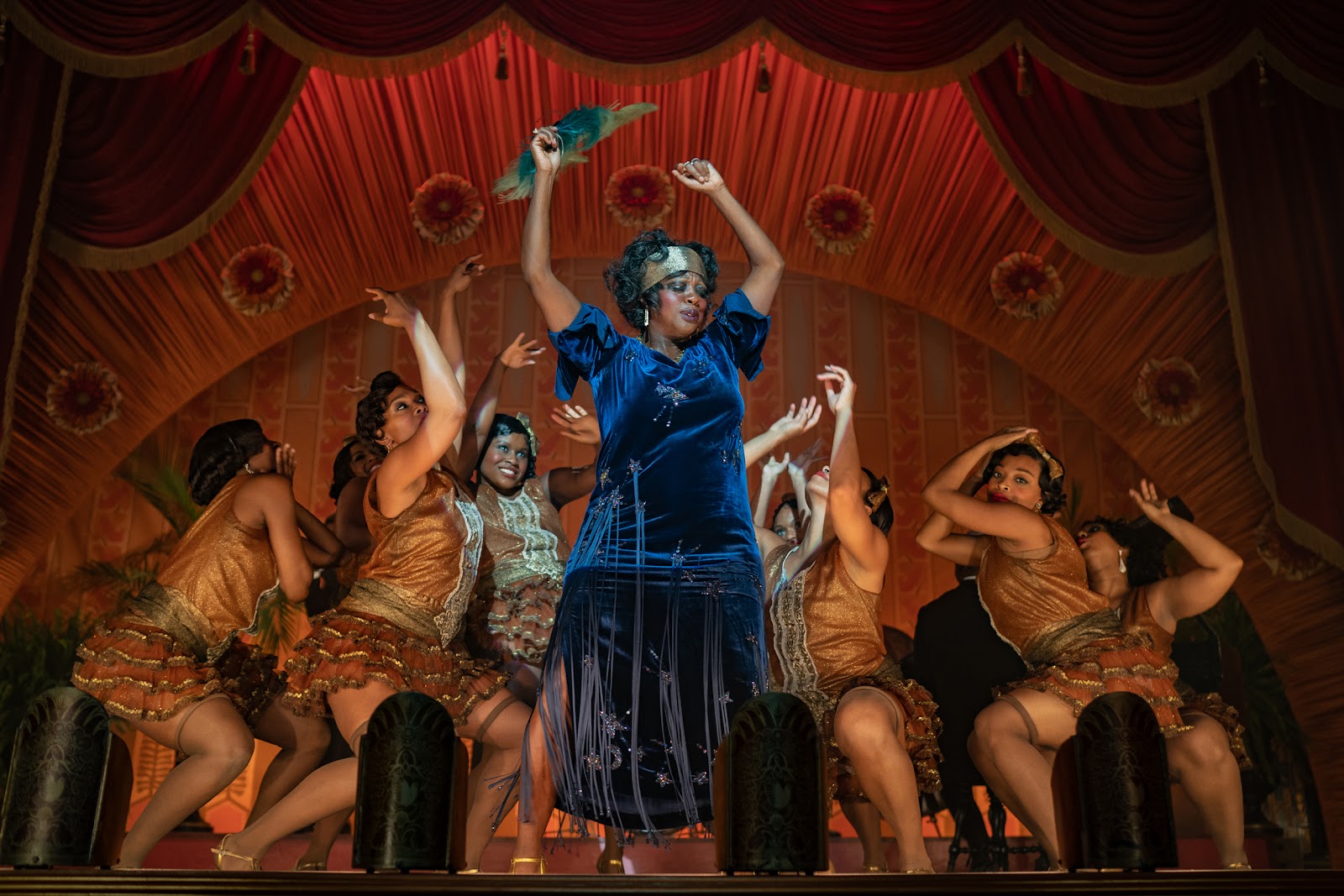 Initially intended to be the second of Denzel Washington’s August Wilson adaptations for HBO, the story of a 1927 recording session in Chicago, Illinois, changed hands to Netflix in June of 2019. August Wilson’s play revolves around the real-life “Mother of the Blues” Gertrude “Ma” Rainey and one particular day in a recording studio under the supervision of Mr. Irvin and Mr. Sturdyvant. Much like another 2020 release, One Night in Miami…, Director George C. Wolfe’s Ma Rainey’s Black Bottom examines the African-American experience through scenes of prolonged dialogue and conflict, set in virtually one location. Wolfe portrays the different perspectives of those marginalized in the early 20th-century social climate by accumulating a cast of vastly different characters and personalities.

It is apparent from the first scene that Ma Rainey, played by Viola Davis, acts as a magnet, attracting the attention of anyone around her and establishing herself in a place of dominance. However, the incorporation of the late Chadwick Boseman’s Levee, with his ego and hubristic charm, creates conflict with Ma’s controlling nature. These two emotional powerhouses are surrounded by trombonist and lead-man Cutler (Colman Domingo), bassist “Slow Drag” (Michael Potts) and aging pianist Toledo (Glynn Turman). As a foundation, August Wilson’s story finds stability, with the possibility to contrast perspectives between genders and multiple generations. Infuse these possibilities with the precarious employer-employee relationship between the band and Ma, and white businessmen Irvin and Sturdyvant, and you not only have a potentially riveting film, but also one with a unique and deeply moving commentary on racial injustice.

However, this is where the film gets lost, as Wolfe’s execution is an unfocused, puzzling and juvenile disappointment. While groundwork and intent are there, and the story it presents is important, highlighting the African-American experience and difficulties in 1920s America, this is a story that didn’t need to be transferred onto the screen. Wolfe’s film incites apathy and discomfort in its viewer as his direction comes across as surface-level, almost as if he just filmed a play. Its structure and dialogue are purposefully fitted for the stage, not the silver screen. Additionally, the performances feel very theatrical, with hyperbolic emotions and very melodramatic line-delivery. The narrative is delivered through frantic dialogue and disorienting editing as Wolfe and his cinematographer Tobias A. Schliessler desperately try to fit in each character’s lines and reactions, unlike on the stage where everyone can be seen simultaneously. For a film set in only one location or so, the production design is quite underwhelming as well. The establishing shots of a bustling 1927 Chicago are uncomfortable to look at, flooded with rushed CGI, lackluster production design, excessively dramatic color grading, and an inconsistent tone.

It’s as if George C. Wolfe was foolishly straining to make Ma Rainey’s Black Bottom feel cinematic, with unique shot composition, montages, and unnecessary moments that force beauty, without subtlety or patience. Numerous plot points don’t add anything to the story, and even Sylvester’s stuttering, which gives Ma a maternal and empathetic light, feels forced. Some racial metaphors or commentaries are explained to the viewer, voiding these moments of any poignancy and not allowing them to put it together themselves. However, with all the film’s faults, there are quite a few saving graces as well. The comedy, while quick and easy to miss, is quite effective in lightening some scenes and establishing comradery between the characters. And, after his tragic passing this past August, Chadwick Boseman truly delivers a fantastic performance, and his passion and devotion flood the screen. Viola Davis – in her sweat-drenched but entrancing costumes – is powerful and effective in establishing a character that is bothersome yet sympathetic. While the film’s pacing is incredibly poor, it does deliver some emotional moments as well, especially towards the end.
Ma Rainey’s Black Bottom is undoubtedly headed for multiple Oscars this coming April and gives us two of the better performances of the year, but Wolfe’s execution makes it an apathetic experience for the viewer. I’ll be absolutely thrilled to hopefully see Boseman win his deserved Oscar posthumously, but I wish his last film was something more memorable and moving than this.